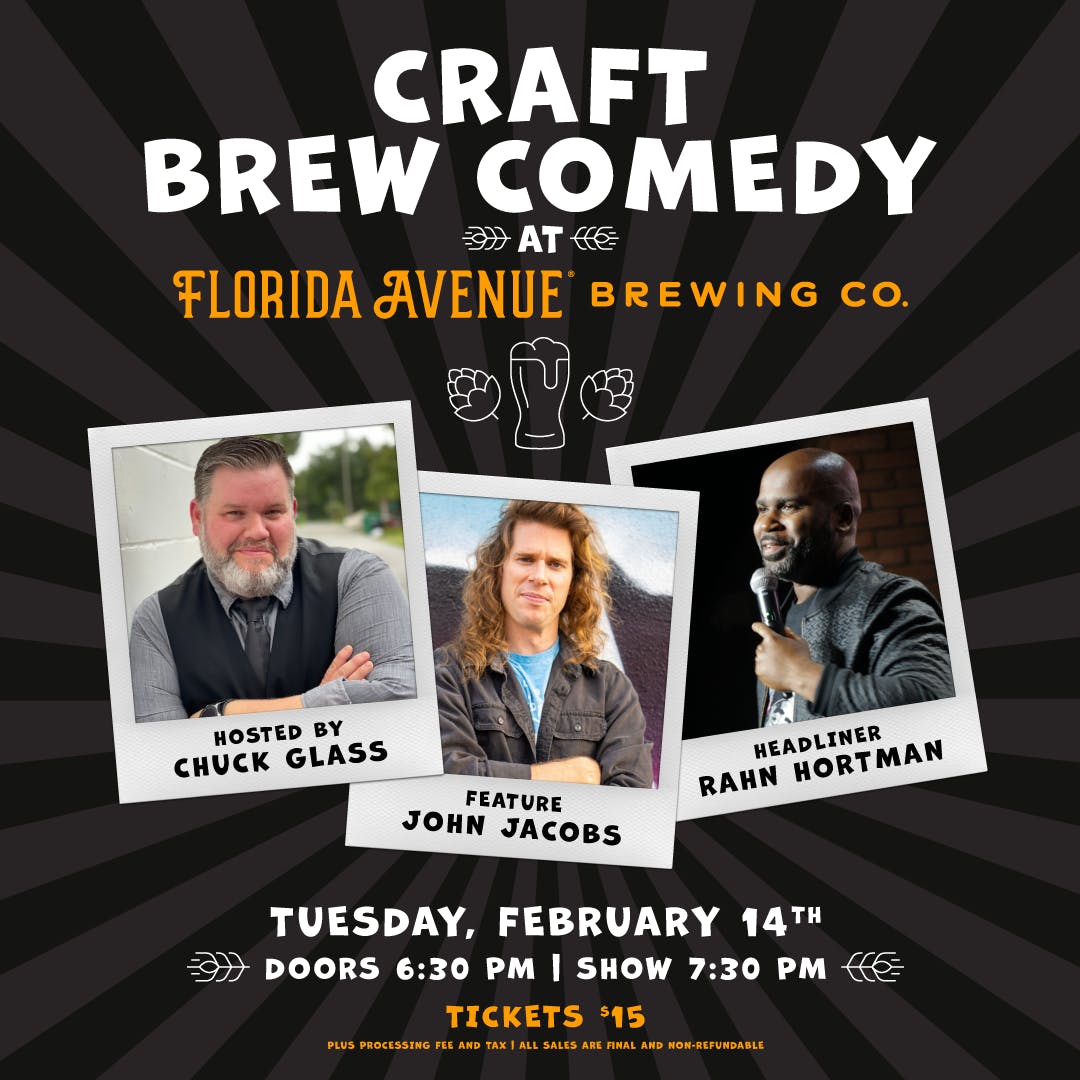 Tickets are $15.00, plus sales tax and processing fee. All sales are final and non-refundable.
Come early and grab dinner before the show! Small groups may be seated with others.

If you have any questions, please reach out to our events director Amanda Derby ([email protected]).

Originally from Washington DC, John starred on MTV’s “Are You The One?” and “The Challenge,” and has been performing all over the country in clubs and colleges opening for comedy greats such as Anthony Jeselnik, Nick Swardson, Margaret Cho, Doug Stanhope, Damon Wayans, Ron White, Godfrey, Chris Kattan, Natasha Leggero, Big Jay Oakerson, and many more. John is one of the original co-founders of the award-winning satirical news team, “Tampa News Force.”

Funny, clever, witty are just a few words that describe Rahn Hortman. His laid back style has been seen all over the country. With Millions of views on social media, literally all over the world. His style allows him to find the humor in tough real life situations, making him extremely relatable and a crowd favorite. His versatility has led him to perform on stage at churches, colleges, clubs, and corporate events. Also, with some of the biggest names in comedy and entertainment. Bob Saget, Jay Mohr, Louie Anderson, and Henry Cho to name a few. In 2019 He went on his first National Tour With Anjelah Johnson on her “Technically Not Stalking” tour. Christopher Titus describes Rahn as “Clean Not Soft.” He has been invited to perform in several festivals, LAughFest (Grand Rapids) South Beach Comedy Festival(Miami) Bay Area Black Comedy Festival (Oakland), and the Asheville Comedy Festival (Ashville) He can be heard regularly on Sirius XM radio. He taped his first special “Good Game” on DryBar Comedy. He was named Creative Loafings “ Best Stand Up Comedian” in 2019.

Chuck Glass began his comedy career on a dare. He took the stage for the first time at the Tampa Improv in front of a sold out crowd and hasn’t looked back since. Chuck’s high energy and physical style of comedy has made him one of the most sought after local comedians today. From his journey as a new father to growing up husky, Chuck’s outside of the box point of view and off the wall antics take comedy to a whole new level. Raised in Tampa, Florida, Chuck began blazing a trail through the Tampa Comedy scene from his debut. Chuck earned his nickname “Unbreakable”, thanks to his sharp wit and uncanny ability to connect with any audience. He was won the L.O.L comedy competition, Show the Funny stand up competition, and the inaugural season of The Big Bang Show. He is also the Creative Director of GotJokes? Entertainment and a 6-time Best of the Bay winner.